Creativity is a unique human ability to generate significantly new ideas and apply out-of-the-box approach to problem-solving, which enables our society to advance one step at a time.

Creative industries, as a sector of the economy, have developed not that long ago. By creative industries we mean areas of activity where most of the GVA is generated as a result of the creative activity and intellectual property rights management. They include architecture, design, fashion, visual and performing arts, music, film and animation, video games, TV and radio, advertising, etc.

- sectors of the economy which gross value added is largely formed from the creative activity and intellectual property rights management.

A number of countries (United Kingdom, Australia, Germany, South Korea, etc.) had recognised socio-economical potential
of creative industries and within the last 20 years have contributed to their flourishing. For the first time, the study assesses
the scale and structure of Moscow's creative economy, presents key approaches to its quantitative measurement.

Sector-specific approach involving assessment
of key economic indicators on the basis of general
groups of types of economic activity.

Assessment of creative employment on the basis
of groups of occupations classified as creative. 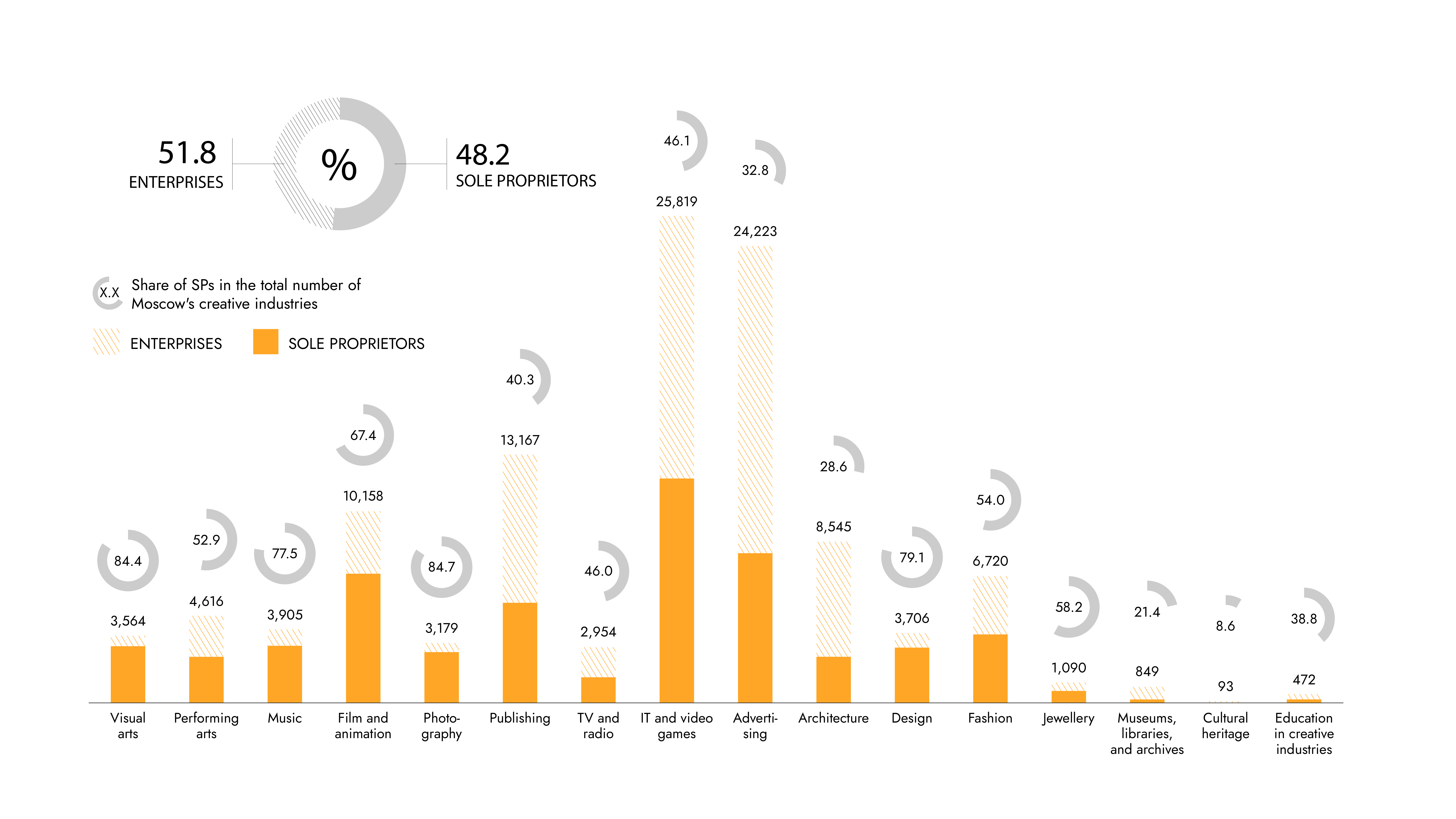 • Over 58 thousand enterprises and 54 thousand SPs are operating within the creative economy. In 2018, the total revenues of Moscow creative industries’ enterprises exceeded 3 trillion roubles and the employment – 463 thousand persons.

• Moscow creative industries gross value added (GVA) is estimated at a level of 1.12 trillion roubles, or 6.29% of the gross regional product (GRP). While the construction industry is regarded as a large and important sector, the creative economy’s contribution to the capital’s economy is more than half as large again (construction industry’s share of GRP is 3.9%).

Moscow can by rightly regarded as the creative capital of Russia 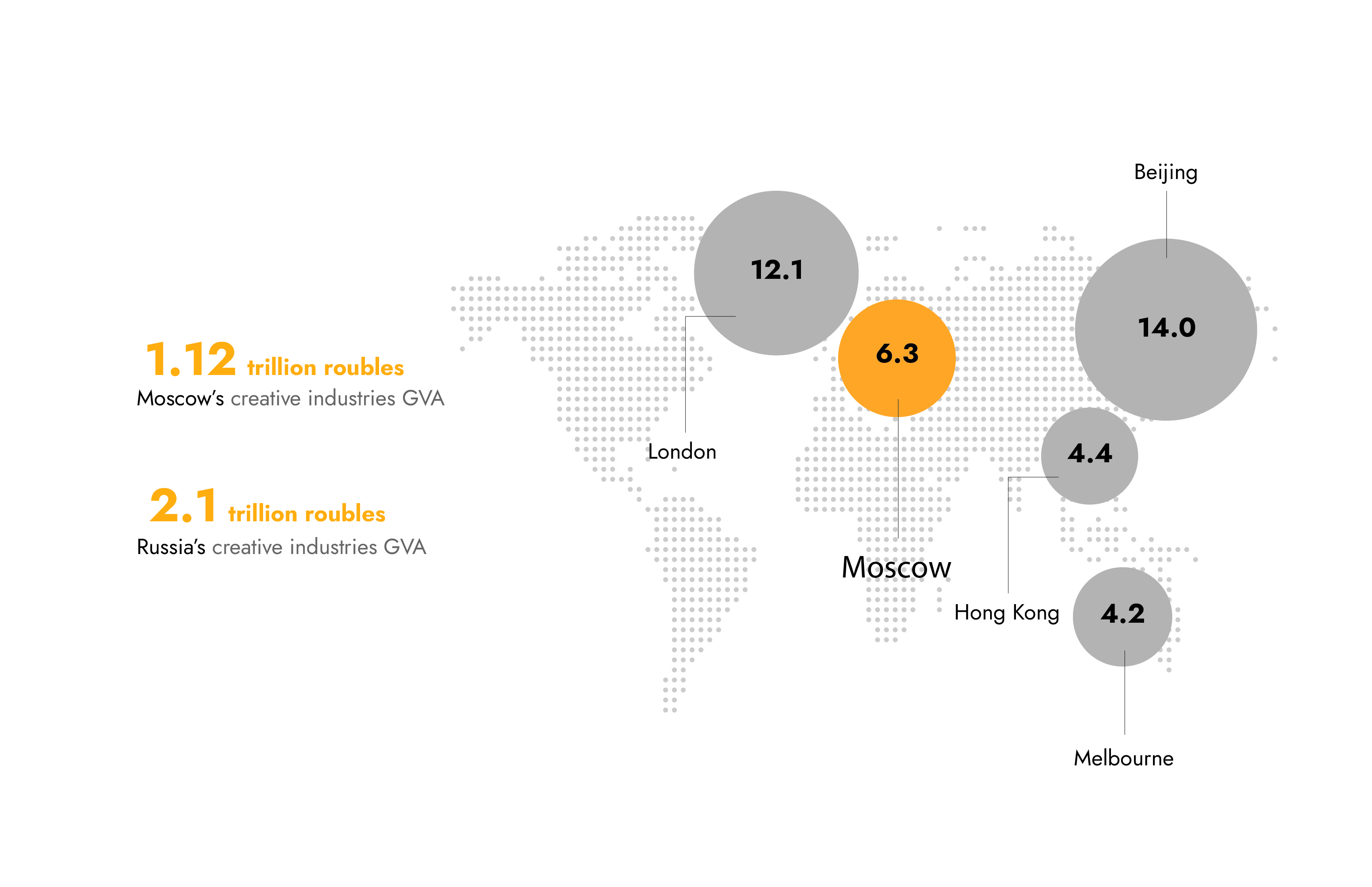 • Moscow enterprises create approximately 54% of creative GVA in the country. By input of the creative sector into the national economy, the Russian capital is comparable to other megacities, given the fact that its industrial potential is massive even on a global scale. 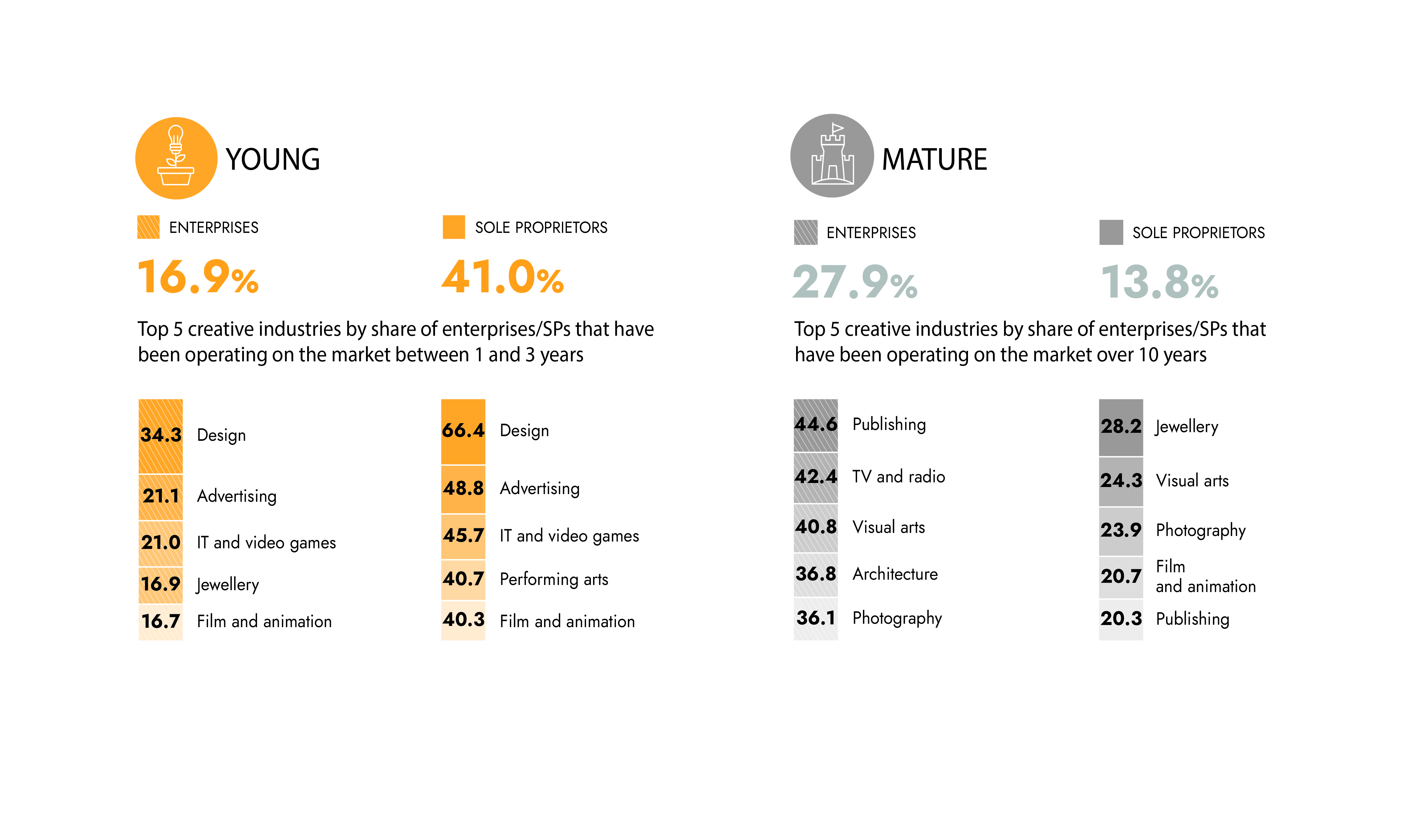 • About 17% of enterprises and 41% of SPs in the capital’s creative sector have been created within the last three years. Young firms are largely concentrated in design (over 50%) and in the largest creative industries – advertising and IT. 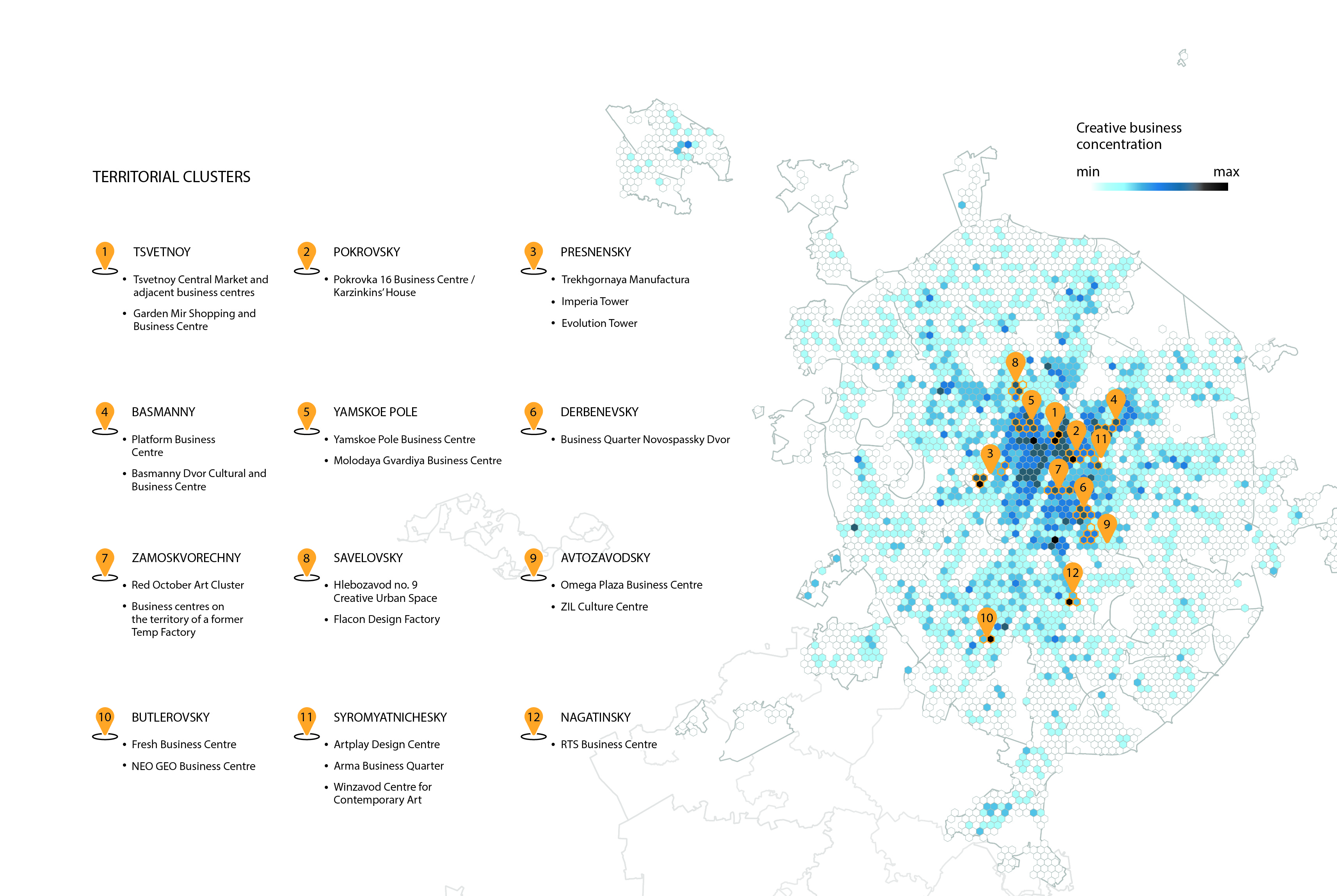 • The largest cluster is the information cluster, including companies engaged in development of software and video games, publishing and advertising.

• The design cluster, being closely related to the capital’s industrial capacities, comprises companies engaged in architecture, fashion, design, and jewellery. 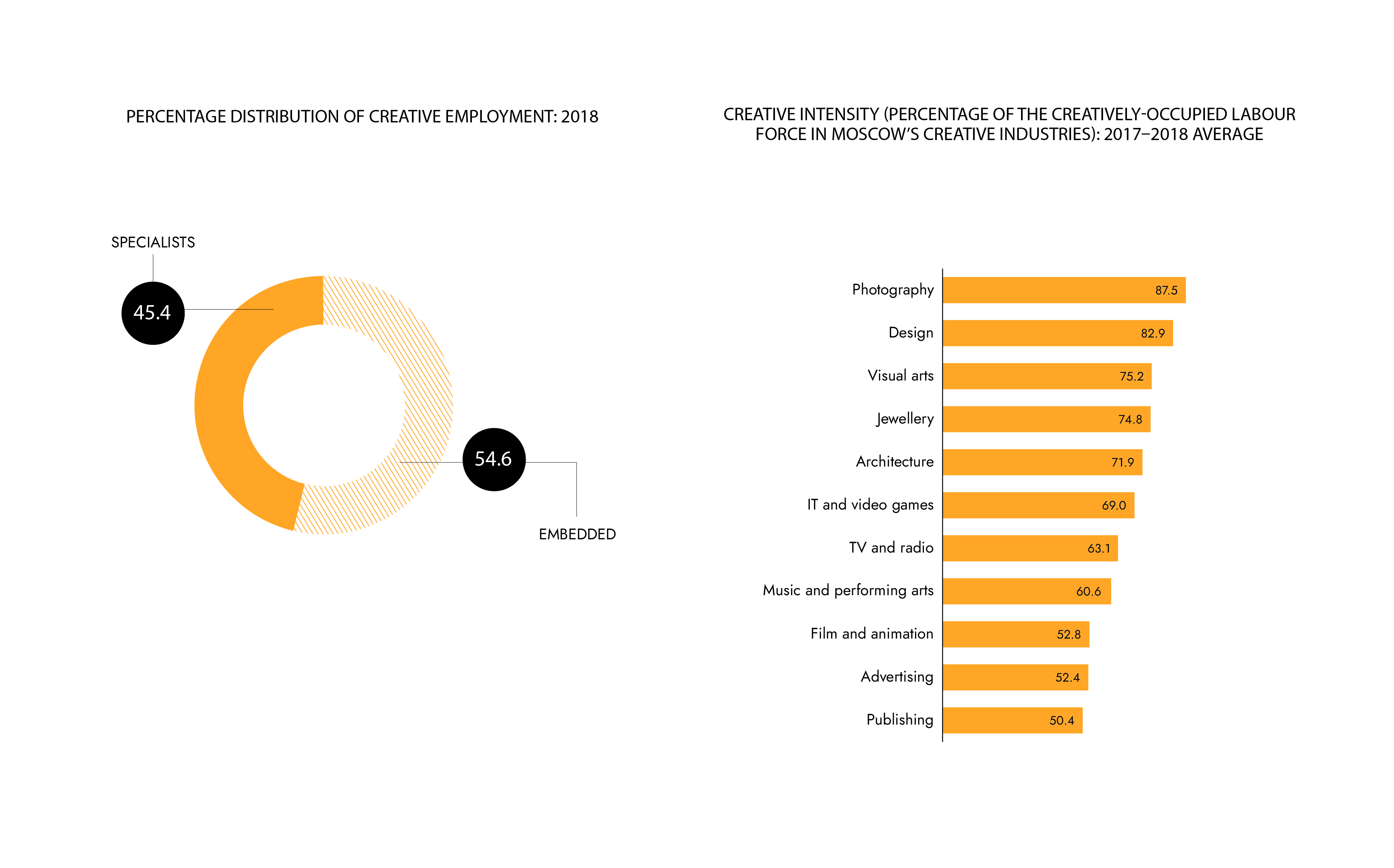 • In 2018, the overall creative employment in Moscow comprised 1.1 million persons, or 12.6% of the total Moscow employment.

• We observed a prominent penetration of creative occupations into conventional sectors: 54.6% creatively-occupied jobs account for manufacturing and other sectors of the city’s economy (non-creative industries).

Creative industries’ enterprises tend to develop in close proximity to one another, rather than to the city centre, metro stations, or industrial zones 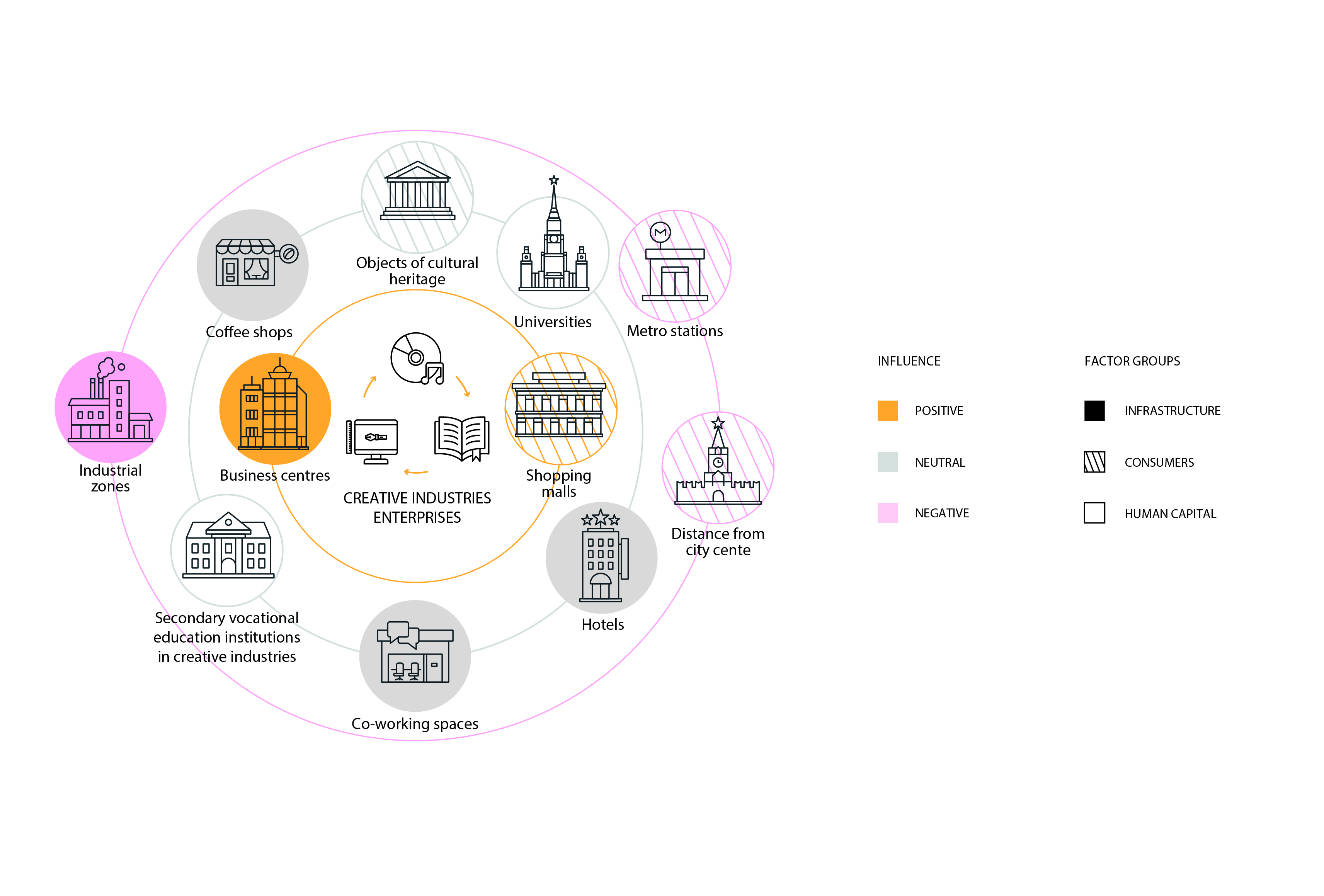 • Newly organised creative enterprises are likelier to be located in a particular city area where the concentration of enterprises of the same sector is the highest. 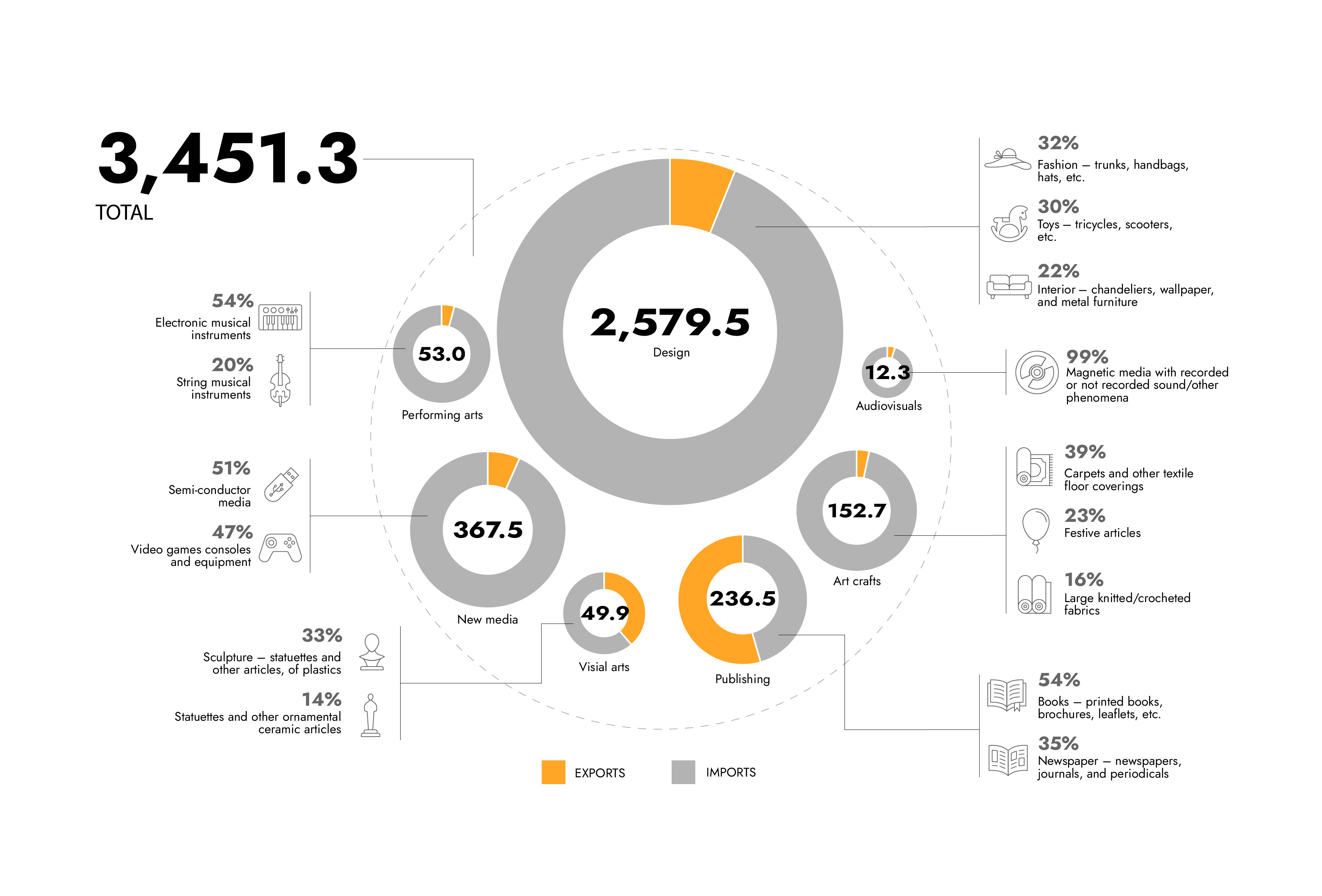 • Foreign trade of Moscow-produced creative goods equalled around US $3.5 billion in 2018. The capital imports over a half of all Russian creative goods and services, and exports – 20.3%. 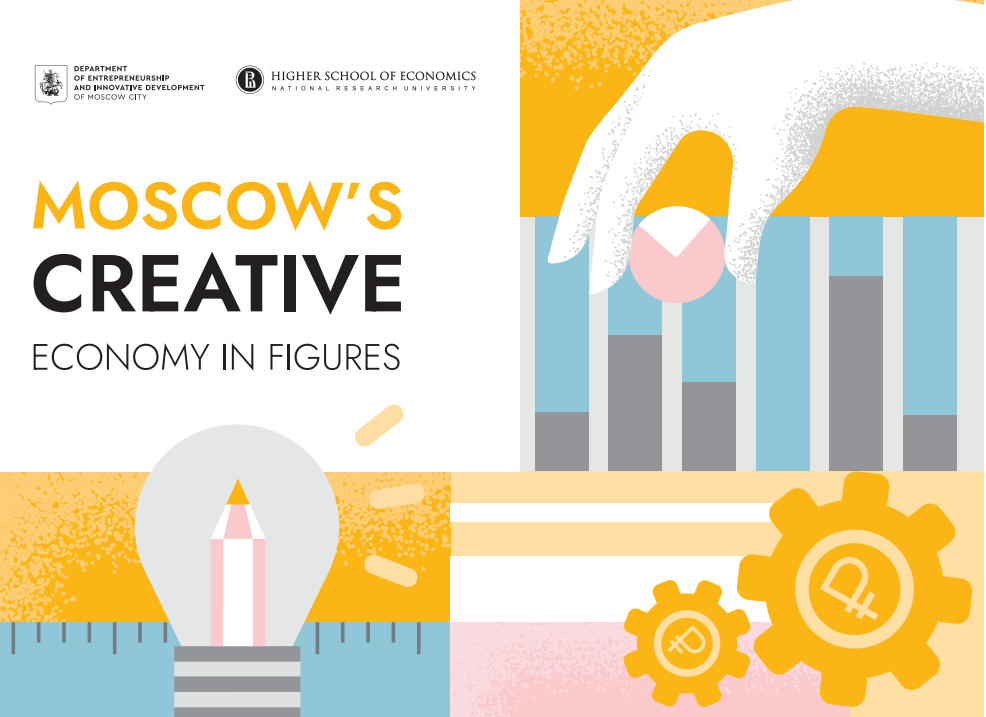 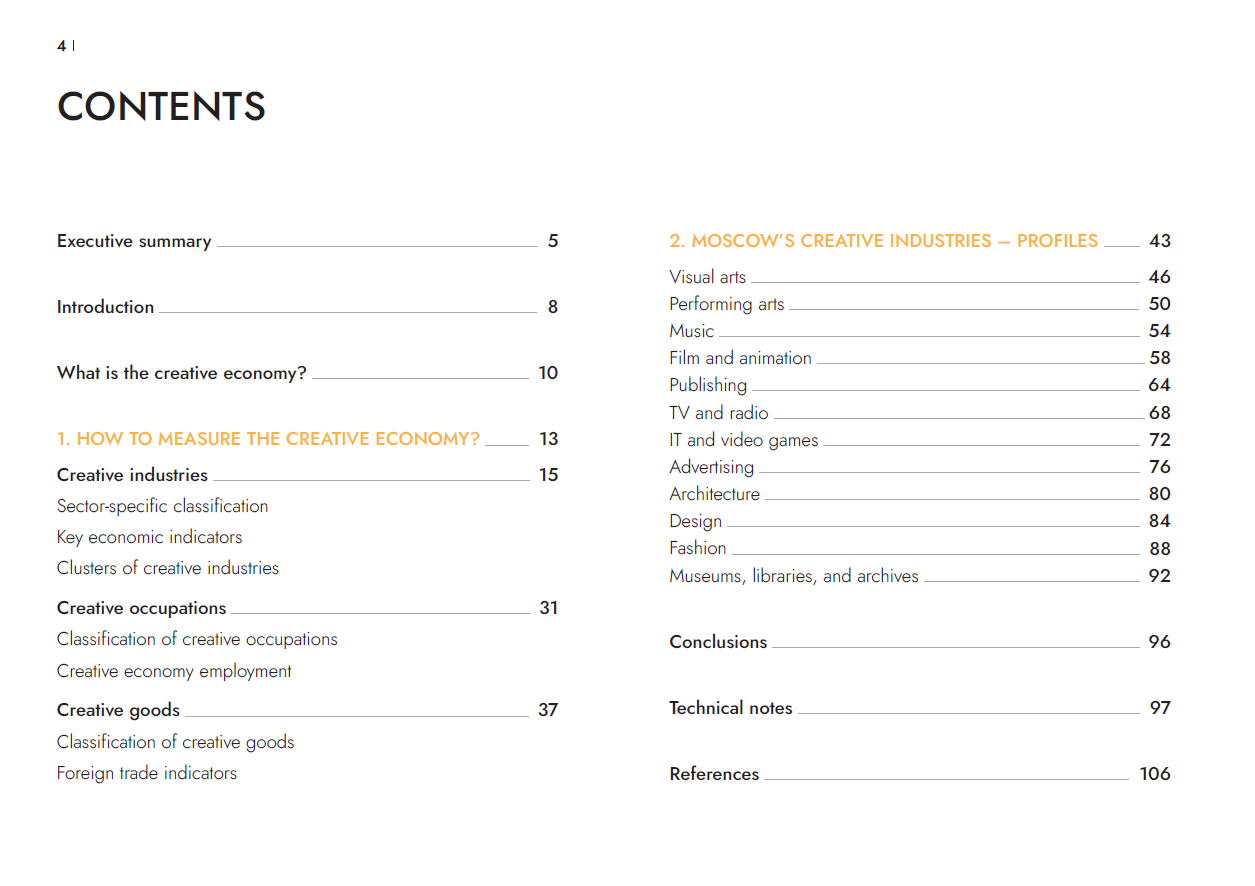 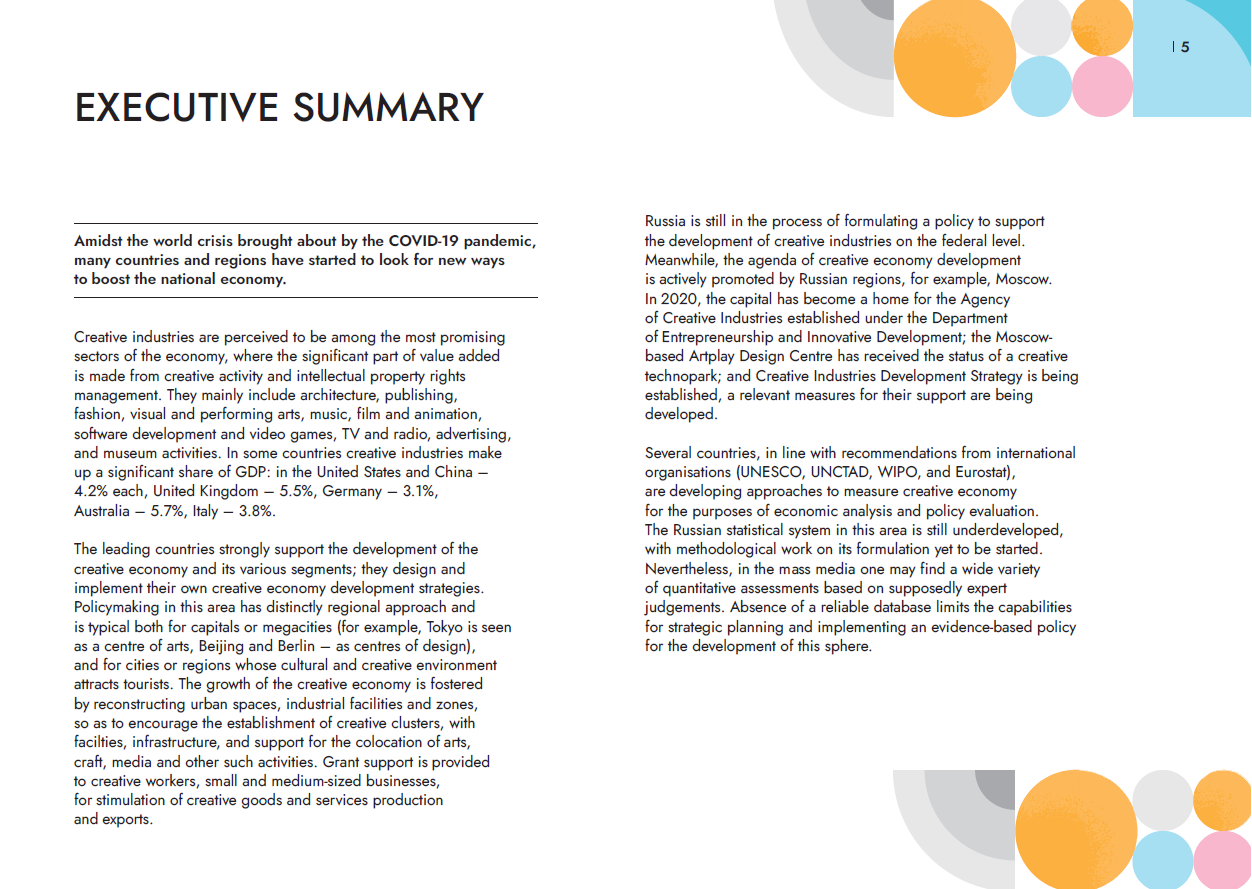 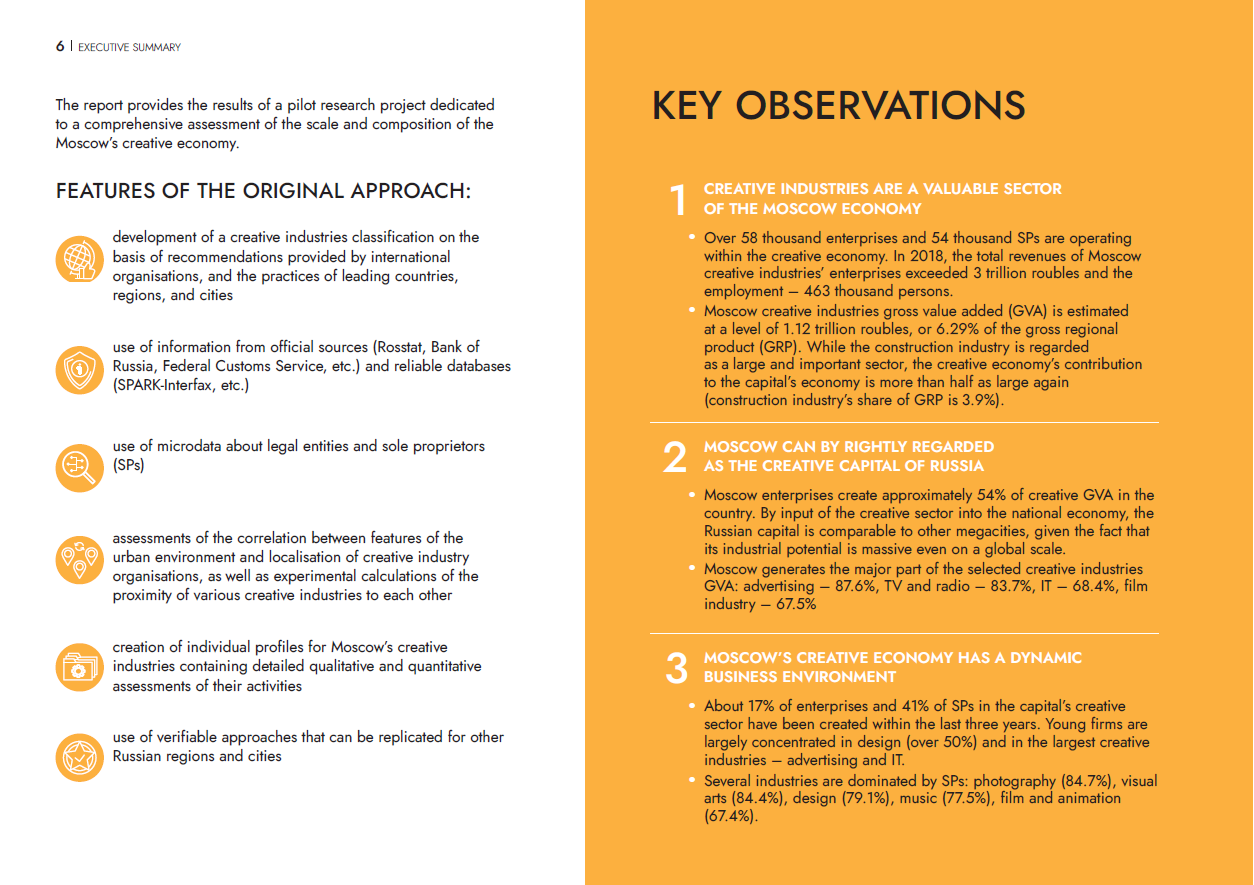 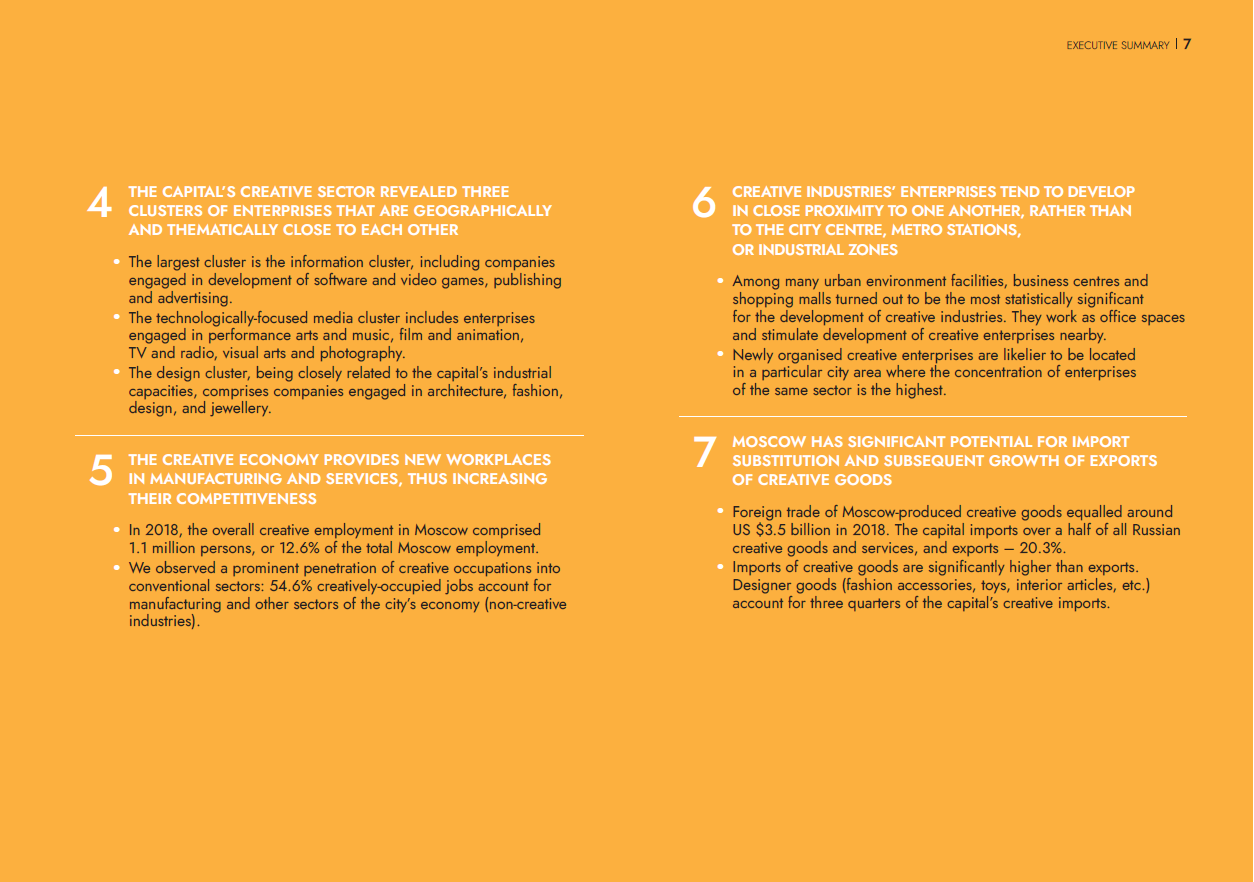 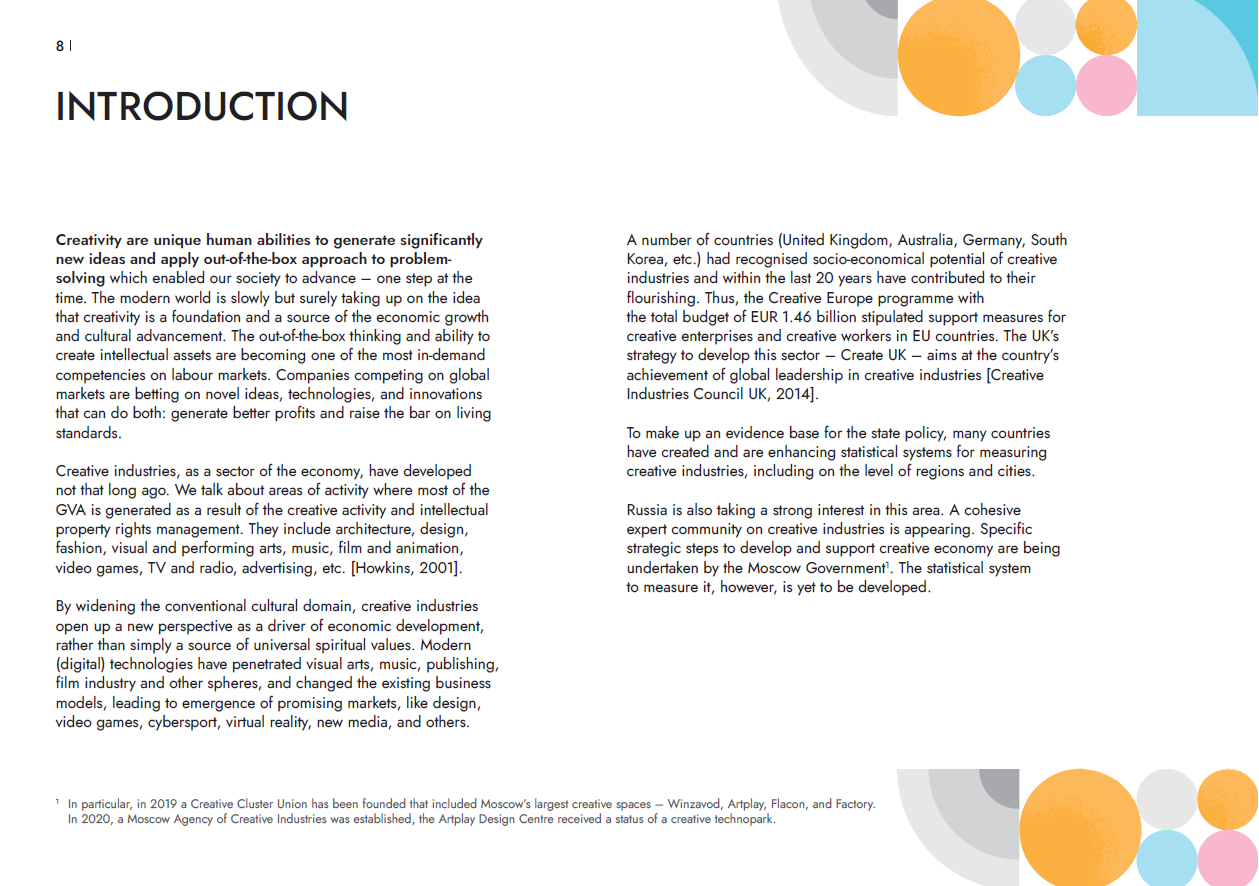 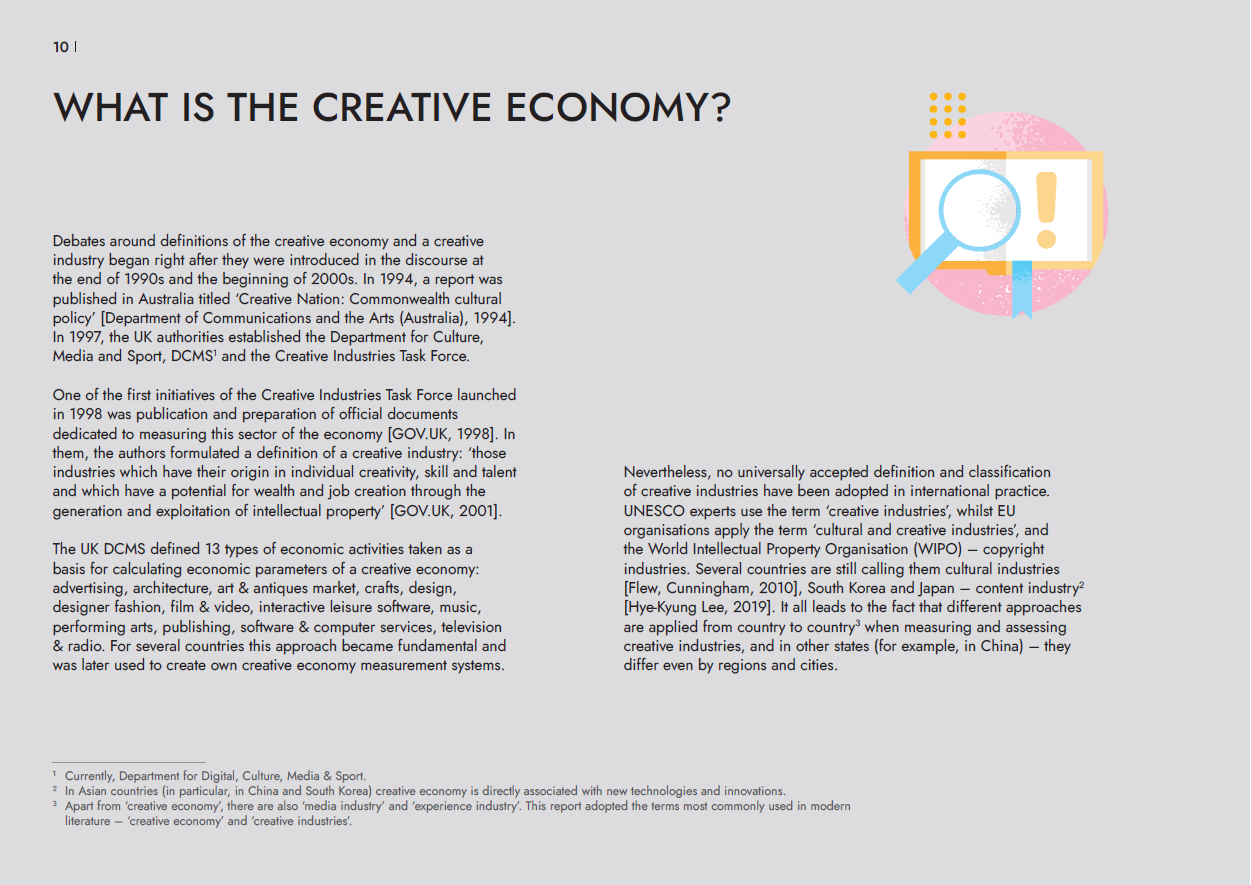 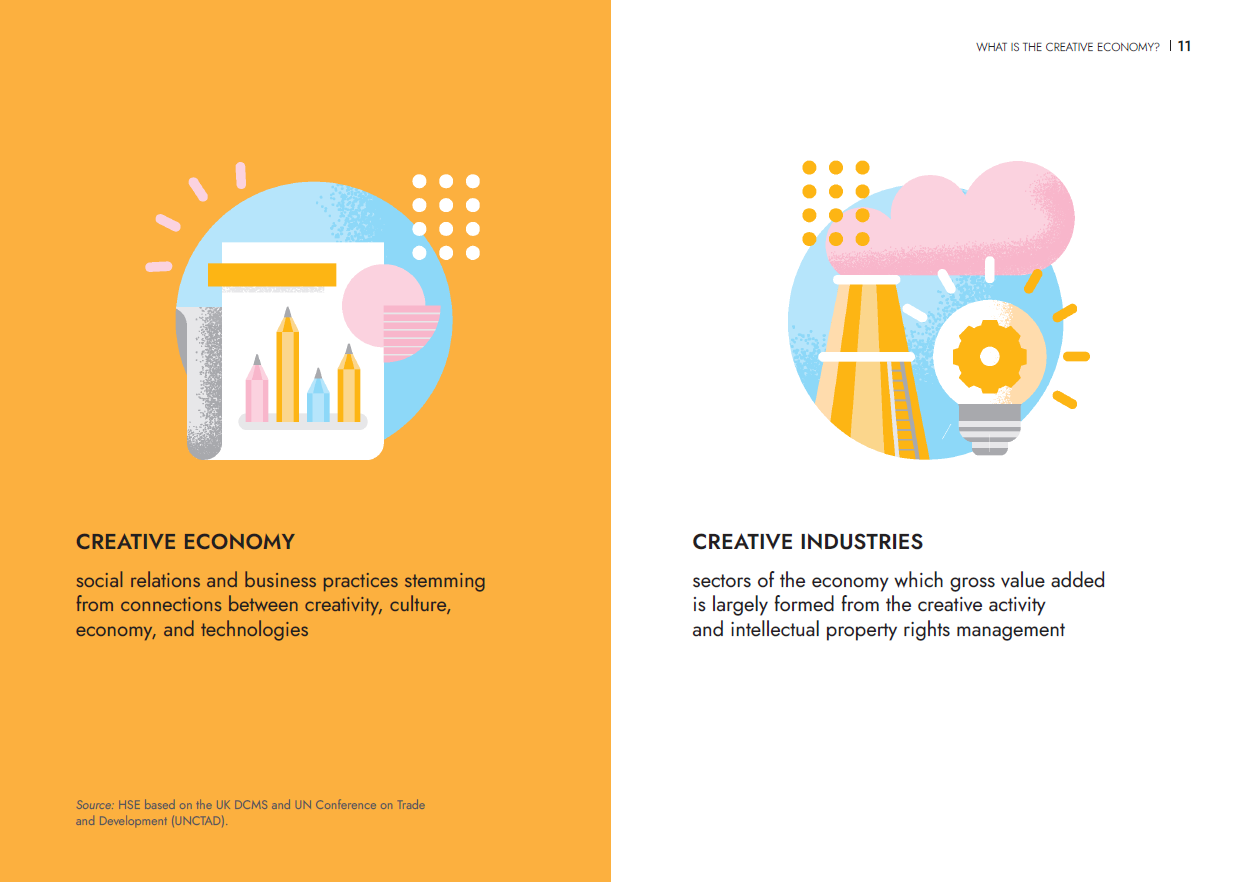 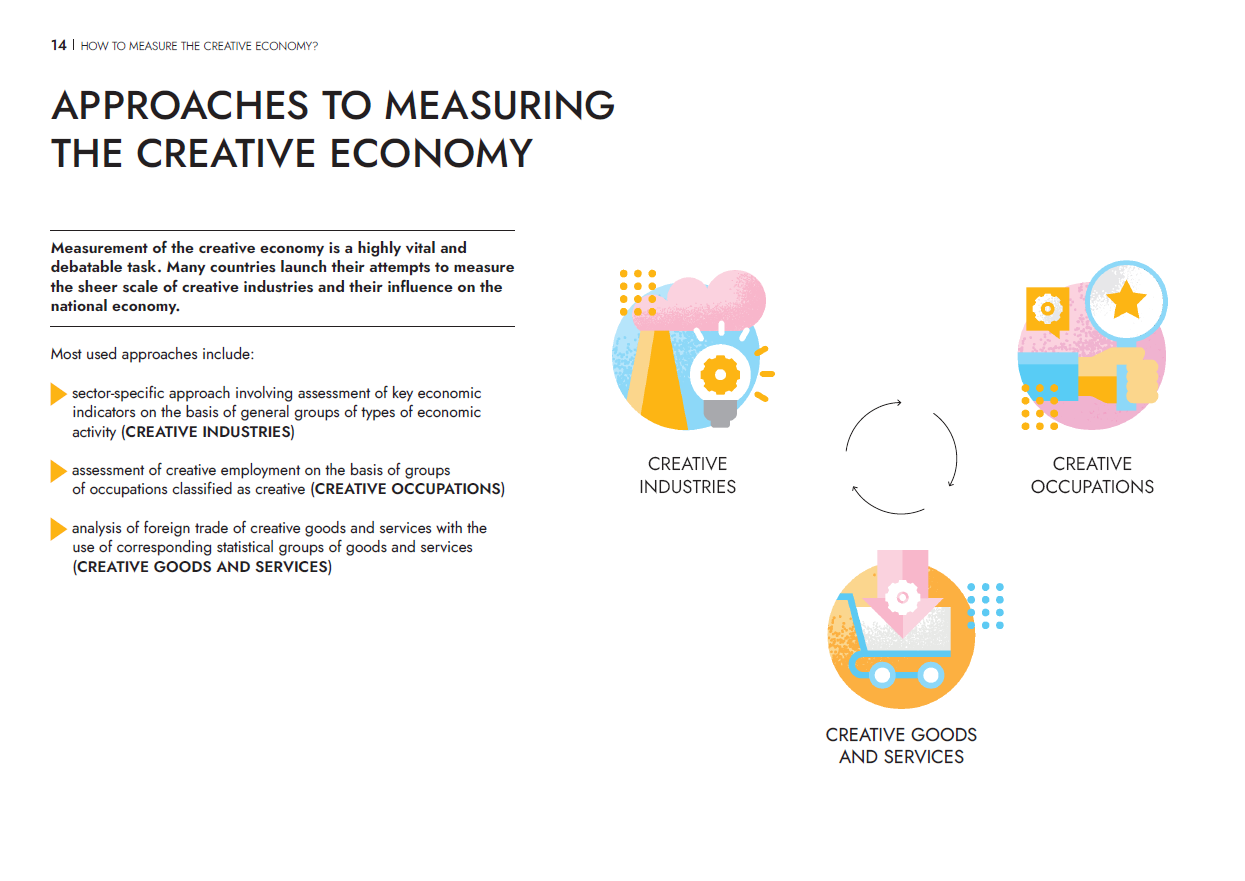 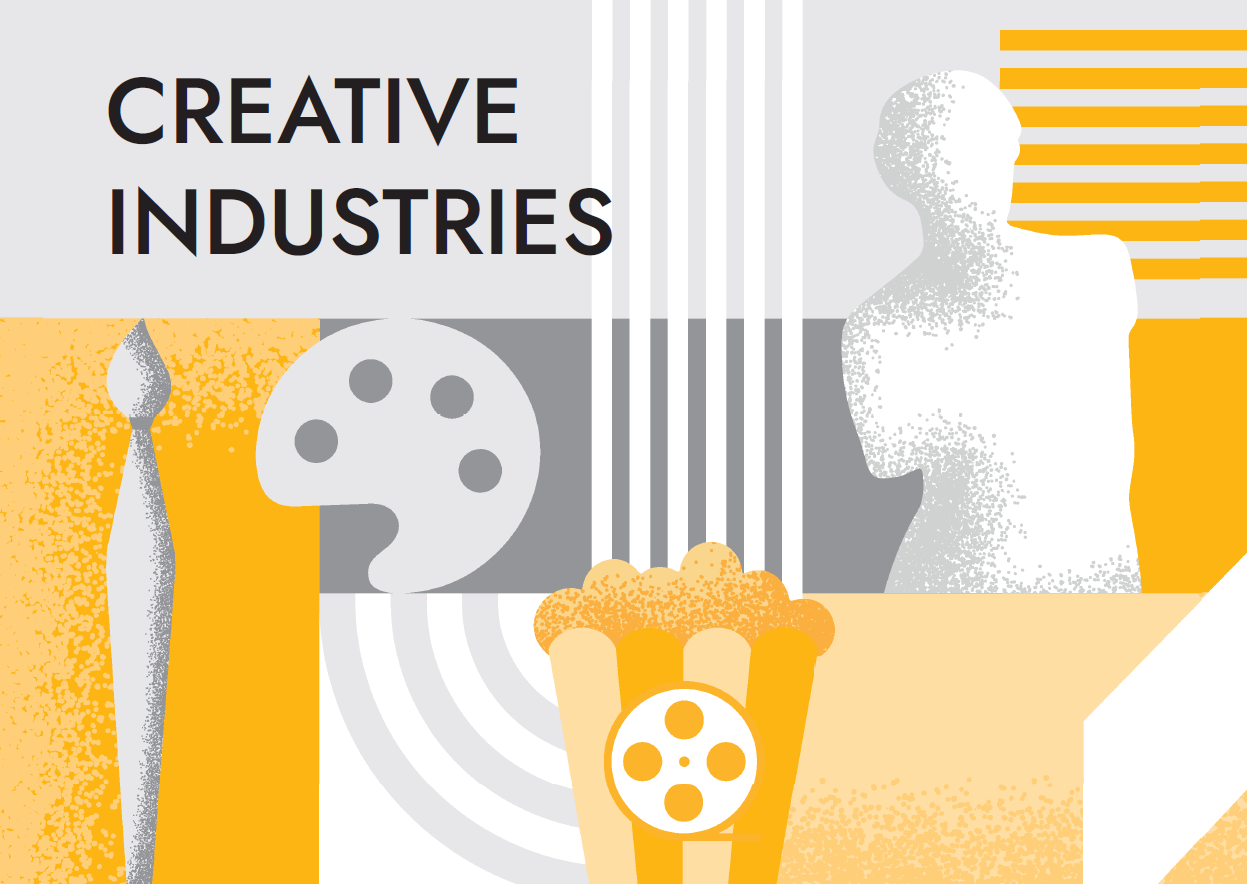 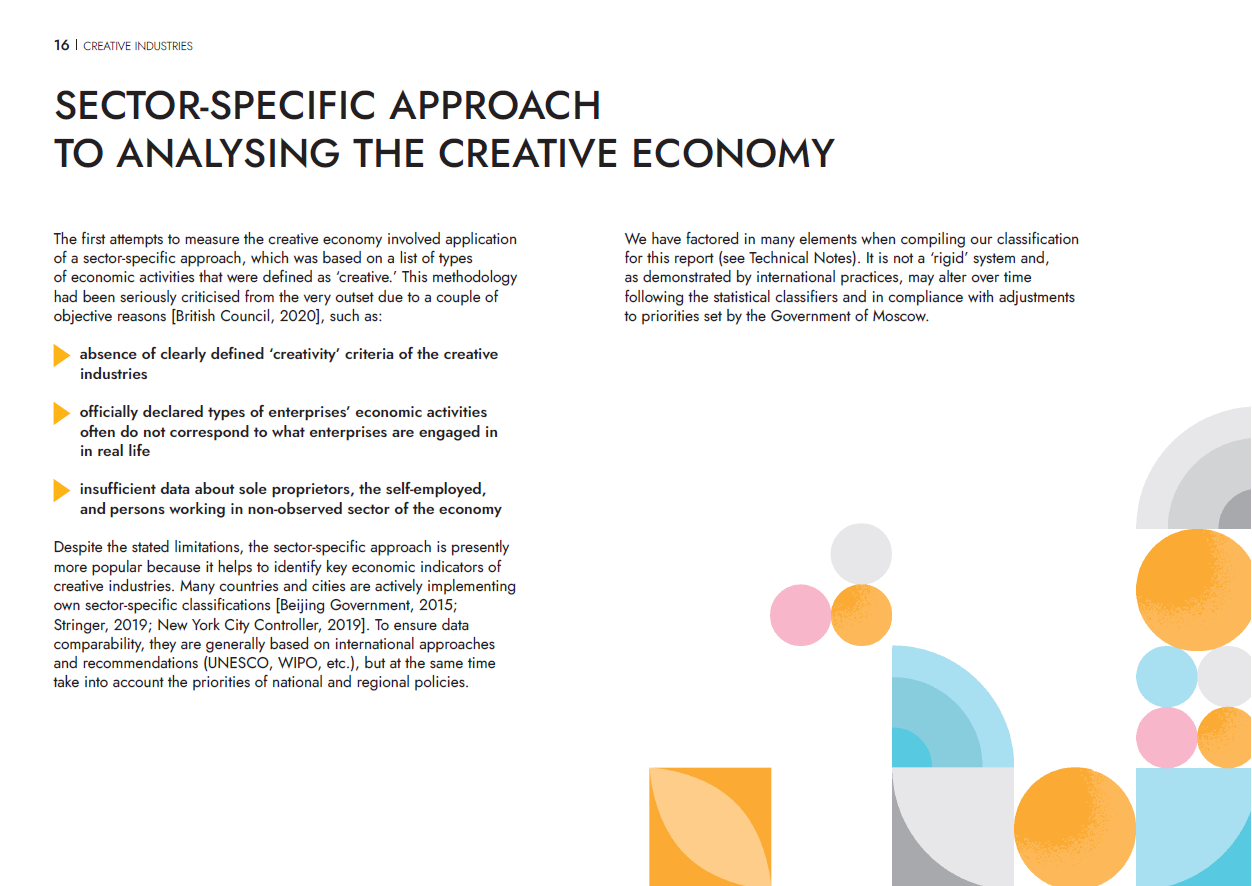 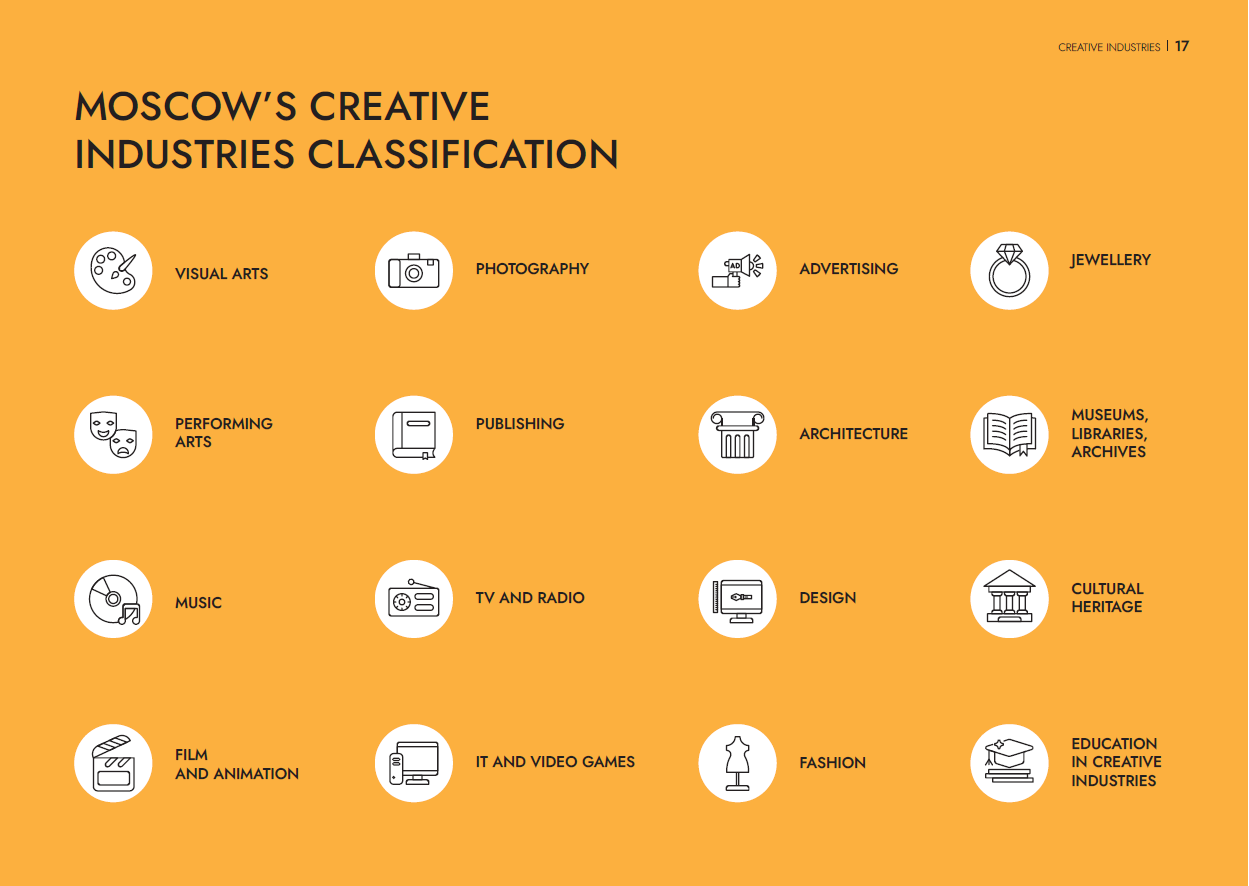 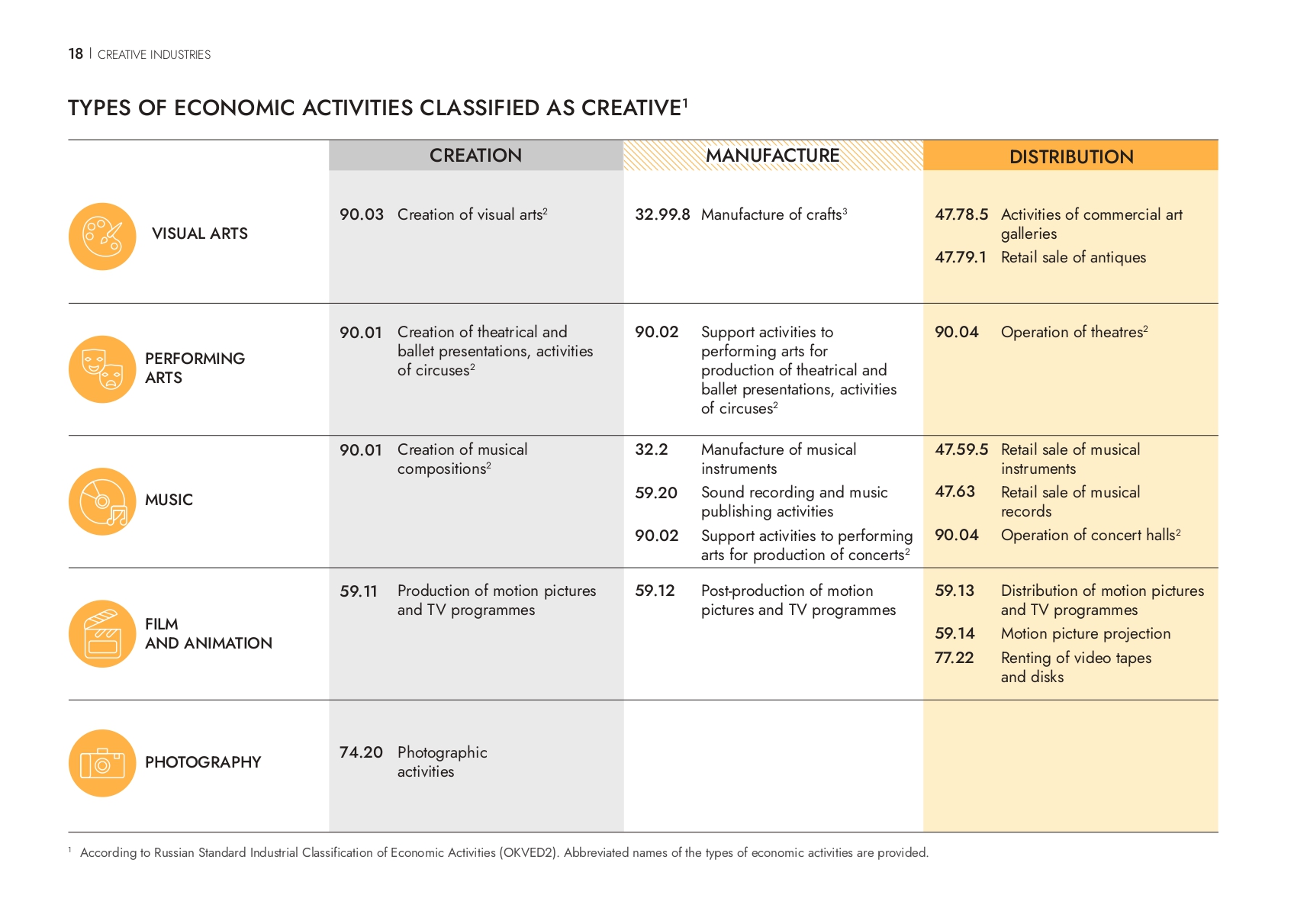 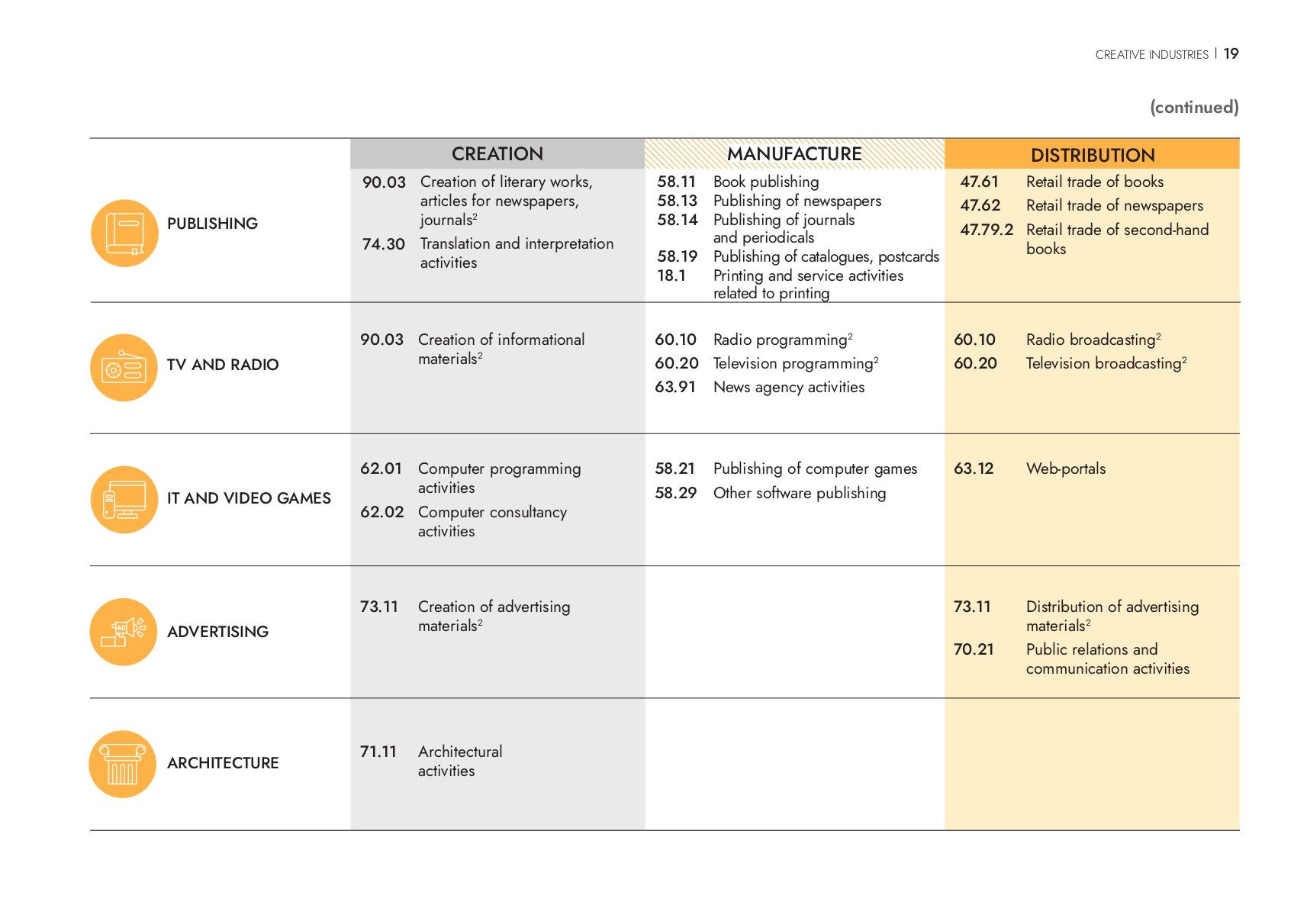 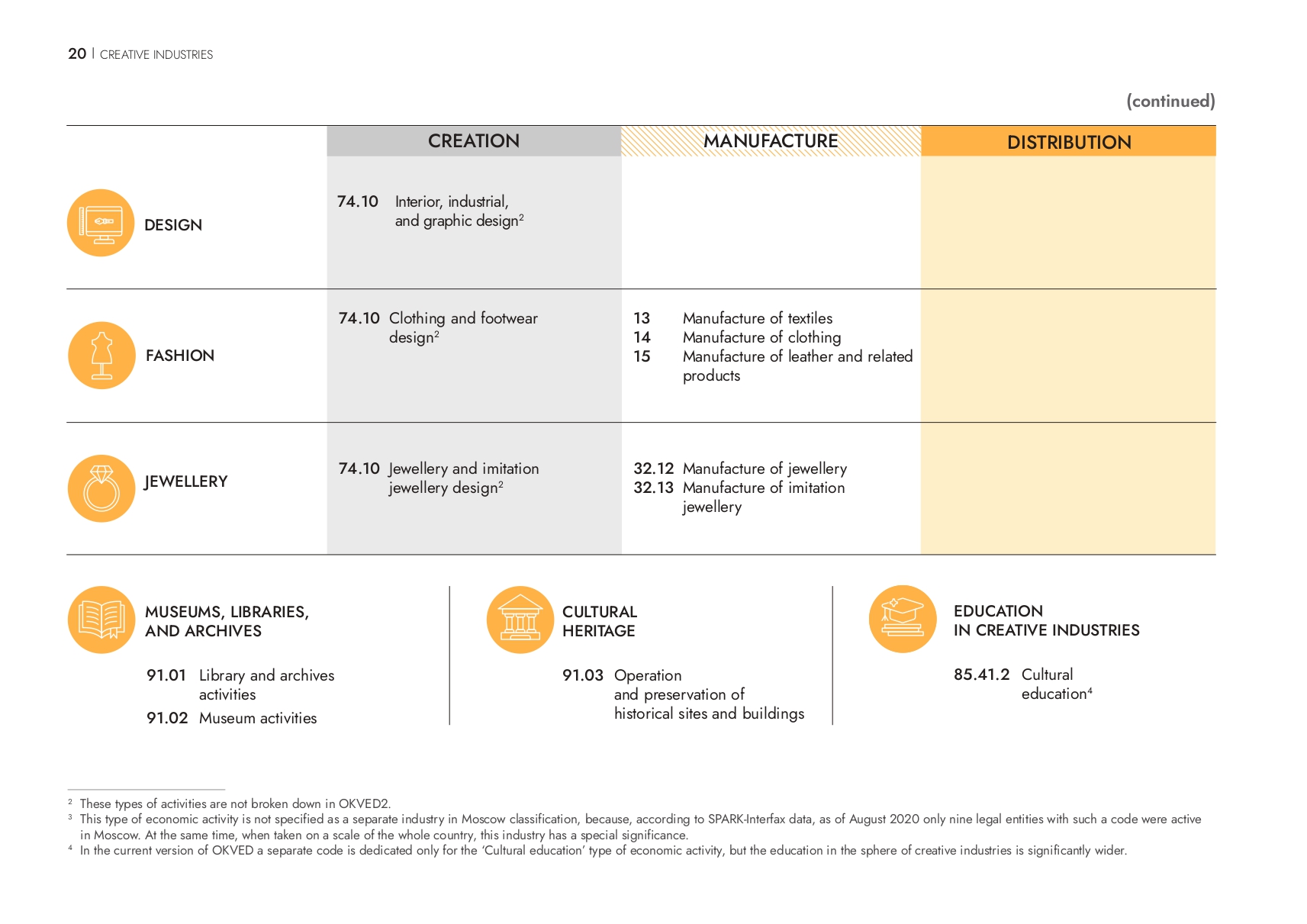 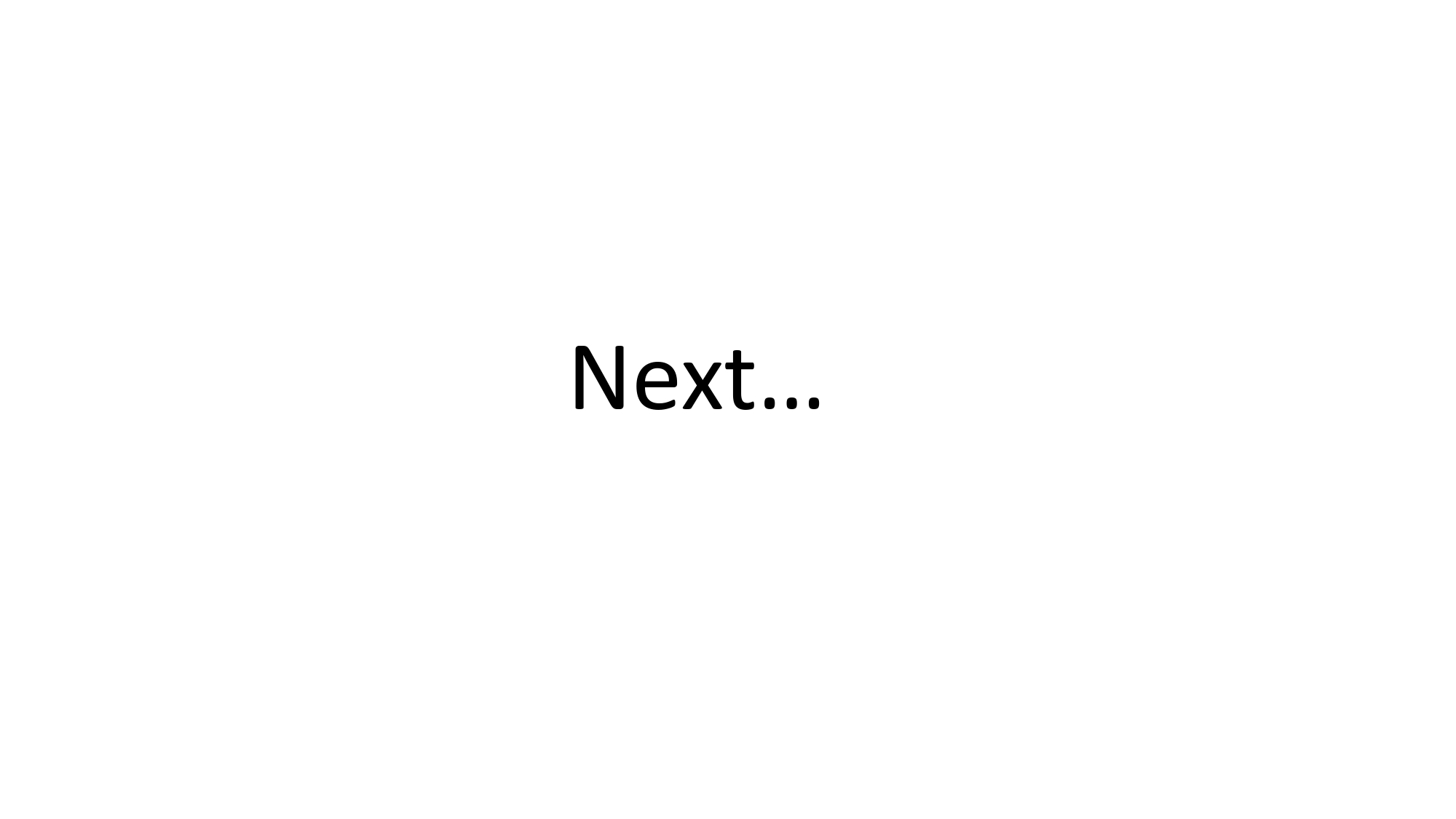 Mikhail Gershman
the project’s supervisor, Director of the Centre for Science, Technology, Innovation and Information Policy at HSE ISSEK